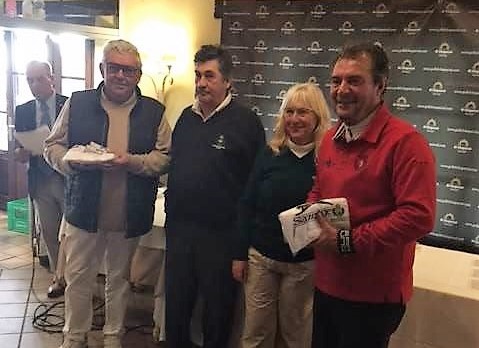 El Chaparral Golf Club hosted yesterday, Saturday, February 11th, the celebration of the second event for the Circuito Senior de Andalucía 2017, which was attended by more than 100 players. They played 18 holes under the stableford handicap system in three gentlemen and two ladies categories. The participants were able to enjoy the privileged environment in which El Chaparral Golf Club is located – surrounded by an extensive Mediterranean forest – and its demanding course, designed by José Gancedo, who put his skill and precision to the test.

As for the results, and starting with the first gentlemen’s category, the winner was Antonio Pérez, who delivered a card of 35 stableford points to take the first position. Only one point behind, the second place in the handicap classification was for Enrique Giménez Huelin, who, in addition, collected the prize for best lap of the day. Equally with 34 stableford points, the podium was completed by José Gago.

Moving to the second gentlemen’s category, Francisco Morales, won the first place thanks to a total of 33 stableford points, the same as Stephen Raoul Peete, who took second place on the basis of the handicap difference. With just one point less, the third place went to Miguel Ángel García.

Jose Antonio Rivera, took first place in the third gentlemen’s category with 28 stableford points. He was followed by Jose Mª Mora, who scored 27 points, and Ramón Gálvez, with 26.

On the first ladies’ category, Antonia Silva and Macarena Benítez, ranked first and second respectively, with an identical result of 28 points. They were followed by Mohanie Sookdeo, with one less point.

Finally, Chelo Zafra picked up the prize for the first place in the second ladies’ category, with 26 points, the same score as Felicity Jordan, who followed in second place. Rocío Hernández, completed the podium with 21 points.

A special mention goes to the player of Los Arqueros Golf & Country Club, Antonio Ortiz who, with 30 stableford points, ranked first in the 70+ category.

The Andalusian Senior Tour 2017 will be divided into 11 qualifying events for the Ranking and will celebrate its grand final in November at Sancti Petri Hills.