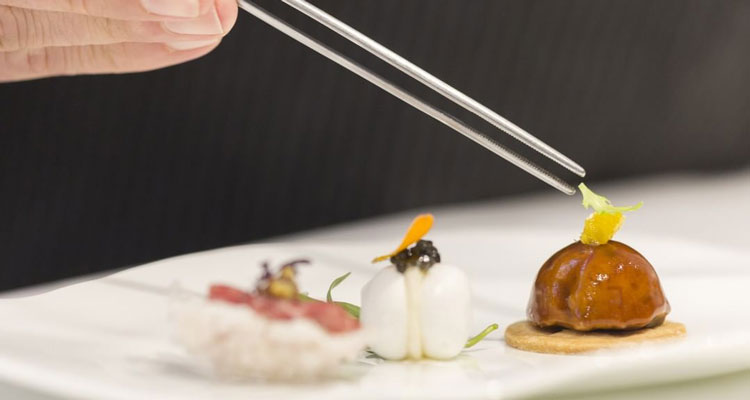 Gastronomy continues to be one of the main attractions of the Costa del Sol in 2021. Let’s see some of the reviews of the best places in the South of Spain according to the most prestigious guide (Guide Michelin), of great importance for the new culinary season.

The luxurious and glamorous city of Marbella is awarded stars in three Mediterranean haute cuisine restaurants such as Skina, El Lago and Messina.

Skina by Marcos Granda, offers seasonal Andalusian haute cuisine, masterfully prepared by Mario Chacinero. A charming place reduced to just 10 diners where the recipe book of southern Spain is recreated with imagination and local and seasonal ingredients. Recipes that have been prepared in Spanish homes for centuries and that have now been transferred to the present with two Michelin stars.

El Lago, located on the ”Greenlife” golf course, is where chef Juan José Carmona demonstrates his concern and passion for cuisine with a Malaga and Andalusian character both in its conception and preparation. El Lago has proudly worn a star since 2005.

Messina, beats with the rhythm of the heart and the passion that Mauricio Giovanini and Pia Nincia show in their work in the kitchen and the hall. Messina is the place where Mediterranean, Italian and Argentine cuisine combine to perfection. The restaurant’s Michelin star has shone since 2016. Now more than ever the main focus is on local products with special attention to fish and shellfish from the Marbella coast.

But the gastronomic paradise of Malaga is not only concentrated under the cloak of the Marbella stars. In the nearby city of Ronda, we find gastronomic luxury in Bardal thanks to the incredible work of the chef Benito Gómez. Bardal offers creative signature cuisine capable of surprising and satisfying the most demanding palates. Benito, along with his wonderful team, Juan Carlos Ochando in the kitchen, Marco Trujillo as Director of the hall and Miguel Conde as sommelier, have managed to improve themselves year after year, being awarded stars since 2017.

Following the exquisite way to the Malaga capital, we´ll make a new stop in Fuengirola, where the Sollo restaurant is located, with Diego Gallegos, chef of Brazilian origin at helm. Diego is known for being the chef who works caviar and sturgeon in the most excellent way. In recent years Diego has done an important job introducing other river catches in haute cuisine, always with respect to the culinary tradition of Andalusia. In addition, it is one of the restaurants that has obtained the new green star for its sustainable and responsible work with the environment.

Then we finally arrived in Malaga, where the work of more than 25 years in the gastronomic sector finally awarded José Carlos García a Michelin star. José Carlos García is in love withthe Malaga products and every day he´s in contact with the Atarazana market and its trusted suppliers. This way of life makes his gastronomy a reflection of his own personality, a successful mix between fidelity to his origins, respect for tradition from the family legacy and, as he himself says, a touch of Rock & Roll.