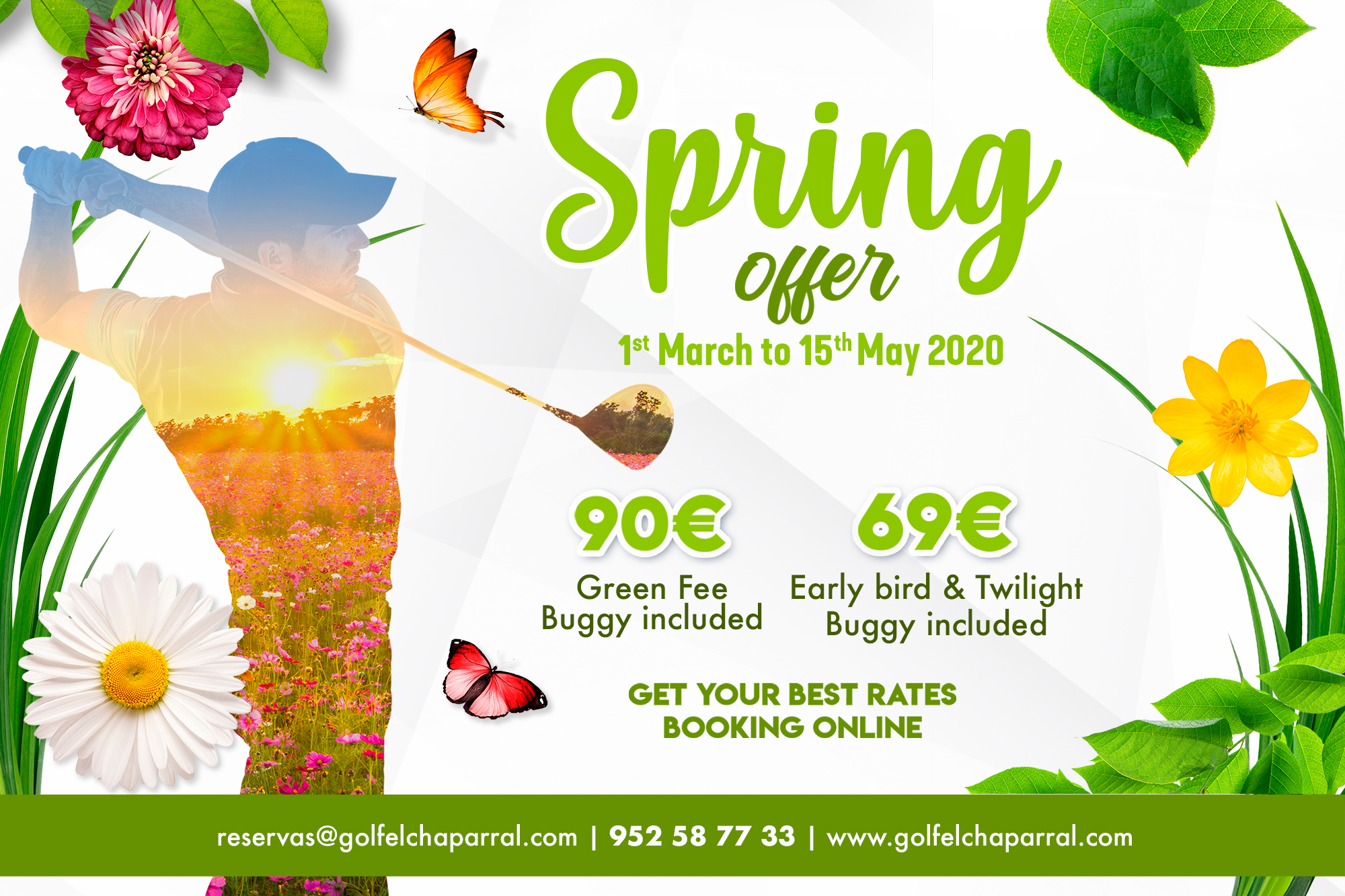 Spring Offer in Chaparral Golf Club |  The life is especially sweet in Malaga this time of the year. The time of transition from winter to spring gives us temperatures already above 20 degrees, which makes it possible to enjoy a day at the beach with pleasant walks and even a bath for the most courageous.  Chaparral Golf Club has prepared a splendid Spring Offer in green fee and buggy.

Combine your golf  in Spring with other activities as well!  During the month of March the region of  Malaga offers events for all type of public and interest. Don’t miss the Malaga Film Festival, the celebration of St. Patrick’s Day, and the “Gourmet Route”.

What´s going on in Malaga in March?

Malaga Film Festival.  This month is an exciting month for film makers, as yet another edition of the prestigious Malaga Film Festival is celebrated between March 13 and 22. More than 2442 films will be presented to the different categories of the festival.

Get the news and updates of the Festival by several channels:

– In the social network of the Festival.

– In the Festival´s magazine, distributed on paper at the points of interest of the Festival and at street level and downloadable in PDF on the web.

– The WebTV, with its own content and live broadcasts of press conferences, red carpet, gala dinners and more.

– An intuitive and didactic app, which allows you to follow the program of the Festival and create your own agenda.

Combine your golf  in Spring with other activities as well!  During the month of March the region of  Malaga offers events for all type of public and interest. Don’t miss the Malaga Film Festival, the celebration of St. Patrick’s Day, and the “Gourmet Route”.

ST PATRICK´S DAY is the commemoration of the patron saint of Ireland and is also a day when the Irish customs and culture  is celebrated. It was made an official Christian feast in the early 17th century.

If you would like to take part in the festivities of this ancient tradition, many of the municipalities in Malaga organize celebrations on this holiday, including performances of Celtic dances, live music (Rock, Blues, Irish and Folk) authentic Irish food, face painting, wizard’s performances, bouncy castles and, of course… copious amounts of beer.

GOURMET ROUTE OF MIJAS For the lovers of gastronomy, don´t miss the “Gourmet Route” until March 30.For 19€ per person you  may enjoy a special menu in including starter, main course, dessert and half a bottle of wine per person, in several restaurants in Mijas. In each restaurant, the menu will be different and specially served for this occasion. A cruise for two people will be raffled among all participants. For more information: turismo@mijas.es